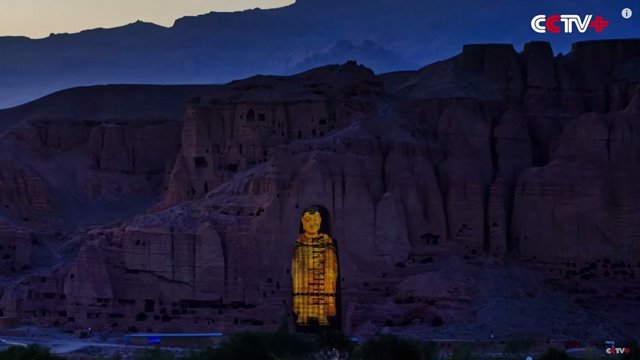 Historic sixth-century Buddhas destroyed by the Taliban made a triumphal if bittersweet return with the help of 3D projection mapping digital signage.

The effort was made possible by a system developed by a Chinese couple, Janson Yu and Liyan Hu, according to the Khaama Press.

The Bamiyan Buddhas — formerly two of the world’s largest standing Buddhas, one of them more than 170 feet high — were destroyed by Taliban militants in 2001.

According to Mental Floss, since the home of the Buddhas, the Bamiyan Valley is on the U.N.’s List of World Heritage in Danger, the projector’s use had to be pre-approved by UNESCO and the Afghan government:

The event brought out more than 150 people, celebrating the Buddhas’ brief return and memorializing the real Buddhas’ absence. A YouTube video from China Central Television (CCTV+) quotes one Bamiyan resident who said, “This cannot fill the empty space of [the Buddha], but it’s something that reminds us that it is not dead.”

According to CCTV+, the couple donated the equipment “to [the] local department of cultural relics protection,” which will “reproduce the images” of the 115 foot and 174 foot statues every year in March.

Watch the CCTV+ video below:

SignCast Media has a wide range of projectors too, contact us or visit our website www.torontoprojectorrentals.com to learn more.