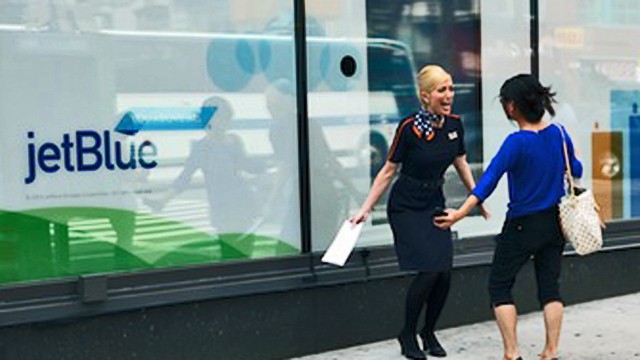 If a digital out-of-home campaign can get people to do the “The Robot” — or even take off their shirt — on a New York City sidewalk, that campaign just might be onto something in terms of interactive consumer engagement.

In a recent spate of promotions aimed at highlighting JetBlue Airways’ robust route and product offerings on the east coast, Pearl Media partnered with Mullen Lowe U.S. to deliver a trio of differentiated and unexpected brand experiences, according to a recent announcement from Pearl Media.

Each brand experience was designed to be infused with JetBlue’s brand mission to inspire humanity at every touchpoint, the company said. JetBlue Airways, known as “New York’s Hometown Airline,” also is a leading carrier in the Fort Lauderdale/Hollywood area of Florida, and the engagements captured viewers in both the Empire and Sunshine states, according to the announcement. One of the featured experiences, Wingman, created a virtual storefront display through which customers were surprised by a real-time interaction with a JetBlue crewmember.

“We are always looking for unique ways to entertain and educate our customers,” said Phillip Ma, JetBlue’s manager of advertising, in the announcement. “To maximize our creative work with Mullen, we partnered with an innovative media production company like Pearl to create rich experiences in New York and Florida that enabled us to reach our customers on the ground. These delivered on the fun factor and illustrated our core brand story and mission.”

“From the edgy approach of using a live crewmember to engage with busy New Yorkers to a fun and interactive game for Florida mall shoppers, these activations were all designed to break demanding travelers out of their familiar patterns and deliver imaginative experiences in line with the JetBlue brand,” Pearl Media CEO Josh Cohen said in the announcement.

JetBlue activations throughout the month of May included: Wingman – Popping up in the Chelsea neighborhood of New York City, the virtual experience became real for New York City passersby. Through the familiar, holographic display customers might see in-terminal, the Wingman execution illustrated how JetBlue infuses humanity into the entire customer and brand experience. Through a digital storefront display, busy New Yorkers were prompted to interact with a seemingly robotic JetBlue crewmember for standard question and answer dialogue around JetBlue product offerings. But, the crewmember quickly surprised audiences in a live bait-and-switch, where she took over the storefront, engaging with customers in real time through unexpected, legitimate conversations. Personifying JetBlue’s egalitarian and award-winning approach to customer service, Wingman highlighted the brand’s core offerings through an entertaining delivery that drove more than 2,600 unique participations. Invaluable customer feedback was also obtained from the activation as twice as many participants selected “Legroom” as the most important JetBlue feature over all other options presented on the home screen interface.

Curaçao – To build awareness for JetBlue’s new nonstop service to Curaçao from Terminal 5 at JFK International airport, a heavily trafficked storefront in New York’s Meatpacking District was outfitted with an interactive digital window that beckoned customers to transport themselves to the cultural Caribbean treasure through pictures and video, allowing them to explore eight distinct Curaçao attractions. Customers were encouraged to engage and share selfies at the display via #JetBlueGetaways on Instagram. Each share entered attendees into a JetBlue Getaways sweepstakes for a hotel and flight package to the Caribbean island. Shades Up – Shoppers in the Aventura Mall (north of Miami) were invited to play “Shades Up,” which Pearl called a first-of-its-kind digital interactive game installation. An actual fuselage was set up in the mall and programmed to spotlight the depth and breadth of the airline’s nonstop destinations from Fort Lauderdale. Simulating the in-flight experience, mall-goers lifted each window shade to reveal unique aerial views of destinations specific to JetBlue’s nonstop route offerings. Customers were prompted to guess which destination they were viewing through the window, which entered them into a sweepstakes to win two round-trip tickets to anywhere JetBlue flies. Over the one-week period the activation garnered almost 9,000 total interactions and 1,678 email submissions representing an 18.75 percent response rate (the industry average is 10 percent), the company said. “Digital SignageToday”

It’s time to get in on the action! Engage your employees and or clients using interactive digital signage, contact us to learn how!